The aim of this study was to investigate the effect of different amounts of hydrogen peroxide and iron resources in refining petroleum (Kerosene) contaminated soils using Fenton reaction. For this, ten complex soil samples around Tehran Oil Refinery were collected and after preparations were contaminated with two levels of 10 and 20% of petroleum (Kerosene) in triplicate. After reaching equilibrium conditions, soils based on Fenton reaction were treated with amounts of 0.006, (H1), 0.009, (H2), 0.012, (H3), 0.018, (H4), 0.059, (H5) and 0.088, (H6) eq of hydrogen peroxide. The three sources of iron as a catalyst included, no iron fertilizer (control), (F1), Sequestrine [EDDHA-Na-Fe] as a source organic iron (F2) and ferrous sulfate as a source of iron minerals (F3) was used. Experiments were conducted as factorial based on completely randomized design. The results showed that there were significant differences between the number of eq of hydrogen peroxide consumption, pollution levels, soil samples and iron sources on petroleum removal efficiency from the soil (P≤0.01). The results showed in all levels of hydrogen peroxide and soil samples, refining efficiency in 10% was more than 20 percent treatment of pollution. The maximum efficiency refining in 10% and 20% pollution level was related to H6F3(90.72 percent) and H6F2 (87.24 percent) treatments respectively and the minimum efficiency refining in both pollution level was observed in H1F1 (for 10% and 20% pollution level 54.96 and 41.91 percent respectively). A negative significant correlation between clay, CCE and pH with refining efficiency was observed in both the 10% and 20% pollution level. However, this correlation for sand was achieved positive. 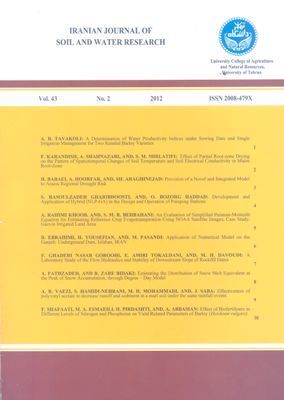